Originally from Minnesota, Stacey came east to attend Vassar College, where she studied Creative Writing and Classics. She joined the team at Escape New Haven as a game operator in December 2017, making her one of our newest hires. 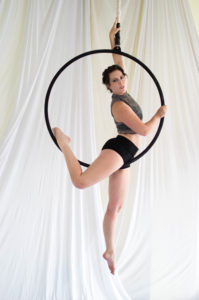 When she’s not at Escape New Haven, you can find her in the air with her circus school, Air Temple Arts, behind the lens with Seriffim Photography, trail running with her slow dog, or writing. Her photography has appeared in the New York Times (in color!), and also appears on the team page of our website (thanks for taking our pictures, Stacey!).

In 2015, Stacey was acknowledged as one of New Haven’s ‘Rising Stars’ by Business New Haven, and was featured on the national PBS program START-UP. She published her first book, The Sum of All Paths in 2015.

The only video game Stacey has ever successfully played through is Portal (fun fact: ENH colleague Jeremy’s favorite game is Portal 2!). Her favorite overall game is The Resistance, because it gives her a good outlet to lie to and yell at her friends (feisty!). But in all seriousness, Stacey is wicked fun to be around, super nice, and is always willing to lend a hand or jump into a project!

Want to know even more about Stacey? Check out her instructor bio on Air Temple’s website.