Ever wondered how we design our games? This is the second post in a blog series about how we approach the challenge.

The “escape room” genre has quickly moved beyond the “escape” trope. In fact, many owners (myself included) find the “industry” name limiting — our games aren’t necessarily comprised of just one room, and your team’s ultimate goal (for example, in our Gallery game) is not necessarily to escape. For better or worse, “escape room” is the term that’s stuck, but it’s not really what distinguishes this genre of entertainment from, say, a haunted house or other immersive theatre.

So what does distinguish an “escape room” from any other immersive, live-action, team-based game? Challenges! We tend to refer to our challenges simply as “puzzles,” because most of them (even “dexterity puzzles”) involve some significant mental effort. (As much as we’d like to include Boda Borg style rock climbing, tunnel crawling, rope swinging, etc., the liability and hardware requirements are just not the cans of worms we want to open right now. 2018, though? Stay tuned.)

We often get the question, “How do you come up with your puzzles?”

The first step is brainstorming. This is an ongoing process:

Whenever anyone on our team thinks of a new puzzle, we jot it down somewhere — Max uses a notebook, Tara saves things on her phone, I use a completely nonsensical and inconsistent mix of notebook + Google Drive + Word docs, etc. We draw inspiration from lots of different places: video games, movies, random things on Pinterest, and yes, even science.

The second step is integration. Once we’ve come up with a scenario and a rough storyline (see last week’s blog post), we can start to pool our collective puzzle catalogues and figure out whether/how they fit the overall design/narrative of our game. Sometimes, quite frankly, a puzzle just doesn’t fit, but we like it so much that we use it anyway. We’re moving away from completely out-of-theme puzzles wherever possible, but as I mentioned in my last post, our philosophy is that “puzzles are primary” (after all, puzzles are what makes an escape room unique!), so we’re still willing to sacrifice some amount of believability at the altar of a really fun puzzle or mechanic.

Here are a few questions that we ask ourselves about integration:

[Warning: Major digression ahead. To skip it, click here.]

A) Puzzles are clearly distinguished from flavor.

B) Puzzles are not readily distinguishable from flavor.

There are plenty of great designers who go with “A” — for example, video game designer Jonathan Blow, creator of The Witness, said in a 2010 interview recently re-posted by RoomEscapeArtist that “adventure games” should be moving toward a more streamlined future where there’s absolute clarity about what is (and is not) a puzzle and which items are in play.

If you’ve played some or all of our games, you’ve probably noticed that we’ve answered this question in a slightly different way in each game. My personal sympathies lie on the “B” side of the spectrum — I’ve always felt that one of the most beautiful things about escape games are their ability to encourage creative problem solving, and I think that people are at their most creative when everything is in play. I love puzzles that encourage people to break free from functional fixedness (the psychological phenomenon of failing to recognize alternative uses for tools or other items).

When we’re able to accurately pose a problem and creatively cast about for tools at hand that might help us solve it (the “MacGyver” approach), we can come up with some really beautiful solutions: 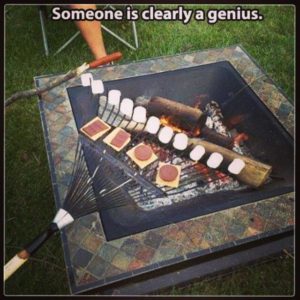 And we want to encourage thinking outside of the box! As such, rules and “staff only” stickers are our enemies, though I have to admit that we use 3 of each in our venue. The rules aren’t going away, but I’m aiming for a future in which the stickers will. In moving into our new venue, we’ve already successfully gotten rid of all “red tape,” which we used to use quite liberally to mean, “don’t mess with this.”

That said, we want our games to be accessible to the public, and based on the many games I’ve observed, the majority of players prefer to be led to a concrete, approachable challenge; sometimes, entire teams can lose energy or become frustrated very quickly when that’s not the case. This has always been true for older players and first-time escape artists; but more and more these days I’m seeing some worrying evidence of an inverse relationship between escape room experience and creativity as well. Sometimes, people who have played several escape games (especially if they weren’t ours) come in expecting challenges to be presented to them in a certain way; and when they encounter unanticipated types of challenges presented in unanticipated formats, those players become frustrated, especially if they self-identify as “good at escape rooms.” This makes me very sad; to the extent that this trend does exist, I see it as a complete failure of the industry to harness the unique strengths that escape rooms can bring to the world of experiential entertainment.

But as much as we at Escape New Haven try to emphasize that there are only three rules, people tend to create their own rules for themselves. One of my favorite puzzles from The Workshop (the very first game we designed) involved a voice recorder sitting on a ledge near the bottom of the opposite side of a door into a locked room. There was a hole cut into the door at head height, and a gap underneath the door large enough for a voice recorder. Here’s what had to happen for a team to obtain the recorder, which contained an important clue:

#3 was the only step that didn’t really lose anyone. We lost a shocking 25% of our teams at Step #1 (self-made rule: “I don’t have the key to the next room yet, so nothing in the next room is relevant to me right now”); another 25% at Step #2 (“rule” #2: “I don’t have to change my perspective”); and another 40% at Step #4 (“rule” #3: “This object is a ‘next room’ object; I’ll get it when I get into the next room”). Steps #4 and #5 went hand in hand; the meager 10% of teams who actually realized that they could obtain the recorder usually figured them out together and accomplished the task.

I’ve struggled with the question of whether we should ever attempt that kind of puzzle again. There’s a tension between what many of our players want (i.e., to be made “to feel smart,” as articulated by a comment in response to an article by Nate Martin, who lumps MacGyver style puzzles in with the “tasks” category and disdains them both), and what designers like Jonathan Blow want (i.e., to actually encourage people to become smarter, or at least more creative). I definitely don’t want tasks to drag on (I’ll talk about that in a minute), and I absolutely see myself as in the business of creating the most fun experience I can for a wide audience, but I’m also not here to lead people around by the nose.

To mediate these tensions, we’re going to be putting a lot of thought into two aspects of our upcoming game:

We’ll use these techniques to augment our tried-and-true strategy of “design like a devil, clue like an angel” (I just made that phrase up, but I think it pretty much sums up how we do things), because it’s infinitely more feasible for us to make things easier for players on the fly than for us to make things harder, and our operators are very good at responding when teams are starting to get frustrated or no longer having fun.

Phew. That was quite a digression, but now we’re finally on to our third step: workshopping. There are several criteria that each puzzle needs to meet in order for it to pass muster, and at some point or another we all have ideas that we really like but struggle to turn into a workable puzzle. That’s where it helps to have a smart, creative team to bounce ideas off of, and a set of questions to answer about every puzzle:

If, after workshopping, a puzzle passes all of those tests (or we make an exception for it because we like it so much), then it will be included in the game!

Our fourth and last (design) step is to figure out the puzzle’s outputs. The “input” is the essence of the puzzle (what does the player have to do to “solve” it); the “output” is what the player gets out of it. Unless the puzzle is clearly for “extra points” only, the only satisfying outcome is for the game to progress in some way — a lock opens, a piece of information is revealed, an item is obtained, etc. In any case, the output should also be accompanied by some sort of feedback which, at bare minimum, tells the player that the puzzle has indeed been solved correctly. (I recently played an escape room where the interior design was beautiful but the puzzles were somewhat confounding: some puzzles failed to provide feedback when they were solved, and others failed to output anything at all. This will never be the case at our venue, unless we’re setting you up for a future “a-ha!” moment.) In some cases, for more complicated puzzles, we even provide feedback for various pieces of each puzzle — the Space Station is a great example.

Ultimately, each puzzle’s inputs and outputs will be massaged into a nonlinear “web”… and then of course we have to fabricate the puzzle… but those are topics for future posts.

– Ethan and the rest of the Escape New Haven team

P.S. Max and I spent all of last week at Escape Rhode Island, our Escape Industries sister company in Providence, working gloriously productive 16-hour days on the build of their newest game, “The Bunker.” We like it a lot. If you’re ever in the area, be sure to check them out!