In May we celebrated the 2-year workiversary of three of our own. Sadly, David left for new pastures shortly after, but we’d like to introduce you to Len and Angela, our OG game operators: 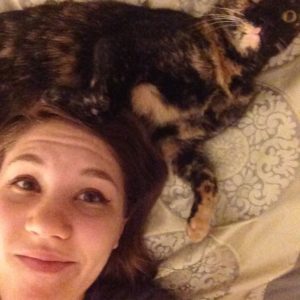 Originally from Buffalo, New York, Angela started at Escape New Haven back in May 2016.  Outside of Escape, she works at Long Wharf Theatre. “I’m often paid in leftover cheese and wine from donor events,” she jokes, “All I do is work really.” However, she also really likes to read. She’s a huge book nerd (self-proclaimed), and also watches a lot of horror movies. She loves food, musical theater, and can play the alto saxophone.

Angela holds a degree in Arts Administration and Theatre. During college, she discovered her love of the entertainment industry during her college program at Walt Disney World, where she worked at the Rock’n Roller Coaster and Fantasmic.

When asked about her special talent, Angela noted that she can reach a pretty high level of nerd in many varied categories; most people only have the patience and attention span to really achieve that level on a few categories. She’s a Hufflepuff and proud of it.

Angela’s favorite games include the board games Bonkers, Dream Phone, or 1313 Dead End Drive. Video games that pique her fancy include old-school Atari games, Midnight Mutants, Pitfall, Zelda games, DDR (which she crushed at our staff retreat!), and Katamari. 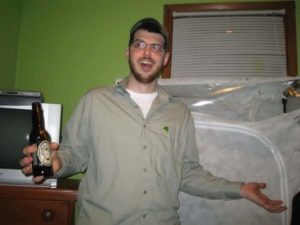 Len started at Escape at the same time as Angela, May 2016. Len has a BA in Economics, he is currently an electrician apprentice, and he used to be in a band.

Outside of Escape, Len likes to go on adventures with his wife and kids, or just stay home and play games, Frisbee, rock out on drums, drink beer(s), and build crazy creations with his carpentry skills.

Len cannot pick a favorite game. He has too many. His board game collection is large and diverse. Some of his favorites are: Settlers of Catan, One Night Ultimate Werewolf, Monopoly, Chess, Risk 2210 A.D., Puerto Rico, Hive, Sushi Go, Power Grid, Pandemic, The Resistance, Pokemon TCG, Carcassonne, Foosball, Battle Line, and Twilight Imperium.